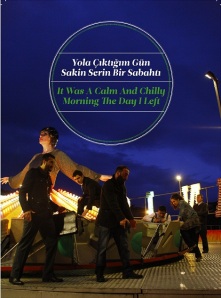 I have recently completed all original music and sound design work for Yesim Özsoy Gülan’s latest play “It Was a Calm and Chilly Morning The Day I Left…”. The play premiered in the IKSV Istanbul International Theater Festival on May 11. The remaining dates in May are below. The play is in Turkish but there is an English translation available at the venue for anyone who is not fluent in Turkish to follow the play.

In their new play “It was a Calm and Chilly Morning the Day I left” VEDST Theater Group is yet again creating a special stage design which shapes their play. The audience who’s surrounded by a fantastic amusement park atmosphere is confronted with a magical reality created by the play in which six characters, in an “imaginary” country where there is an increasing violation of freedom, search for a solution to their situation. The play lays out a political atmosphere in which the audience is expected to correlate with his/her own existence. While the carnivalesque metaphor of an amusement park is subverted, the references are also de-contextualized. As the play unfolds issues related to freedom violations, Turkish/Armenian conflicts, massacres related to differences in religious sects, Kurdish identity and sexual exploitation and discrimination of underage girls are under focus. The play creates a space for the audience to break the codes and decipher the meanings…