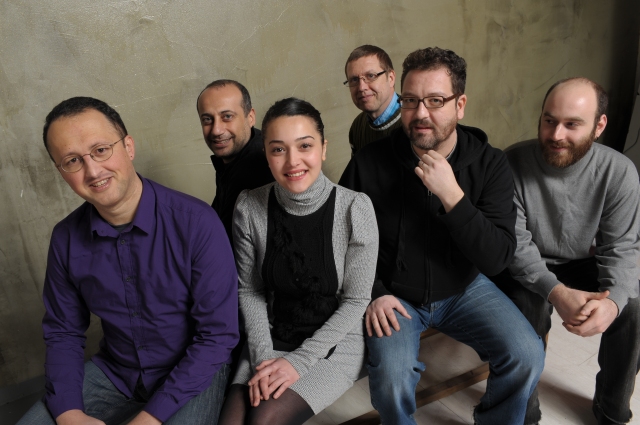 Islak Köpek was a free-improvisation ensemble based in Istanbul, Turkey. It was active between 2005 – 2013 and managed to place Free Improvisation on the Turkish experimental music chart. It played in the Akbank Jazz Festival twice (2006 and 2012) and released two physical and one digital album in 2006, 2009 and 2011. The band got together for two concerts in Istanbul and Berlin to celebrate their 10th anniversary.

Islak Köpek’s original lineup of two founding members Korhan Erel, Sevket Akinci with Volkan Terzioglu and Volkan Ergen had their first performance in the summer of 2005. Following a series of performances at Galata Perform and Jazz Cafe in Istanbul, Dirk Stromberg and Robert Reigle joined the band in January 2006. The six-piece band played regular performances at Galata Perform as well as other venues. Volkan Ergen left in the summer of 2006 to pursue other musical interests. The five-piece band played in Transit Improvisation Days Istanbul 2006 with Le Quan Ninh, Kirstie Simpson, Talin Buyukkurciyan, and Yanaël Plummet, a sold-out concert at the Akbank Jazz Festival in September 2006,  in the A.M.B.E.R. Body-Process Arts Festival in 2007 (www.a-m-b-e-r.net), The Triangle Project (a side project of the 10th Istanbul Biennial in 2007). Dirk Stromberg had to take a leave from the band to pursue his teaching career outside Turkey. Dilek Acay on violin played with Islak Köpek in 2008 and 2009, while cellist Kevin William Davis was a member from 2009 until the end of his stay in Istanbul in June 2010. Gülşah Erol played cello with the ensemble from 2011 until 2013.

Islak Köpek released their first, self-titled album in November 2008 on the Turkish label “AK Müzik” with the original six-piece line-up. This album was listed as on of the top 25 albums of 2009 by Turkish monthly Express magazine, a suprising accomplishment for a free improvisation group. They released their second album, ‘One Year Later, Two Years Ago’ on Turkish free music netlabel Re:konstrukt (www.rekonstrukt.com). Their last album, Istanbul Free Impro Sessions May 4, was recorded with Mark Alban Lotz and released on the Dutch label Evil Rabbit Records.

The band members have been doing a show on free improvisation and free jazz called “The Other Jazz” on Acik Radyo (FM 94.9) since May 2006.