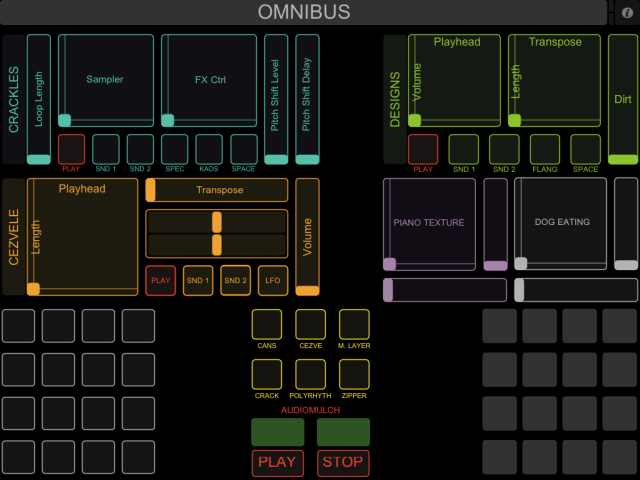 Korhan Erel played a solo set with his computer instrument Omnibus at Gram, one of the new alternative music venues in Kadıköy, Istanbul.

Omnibus is a collection of instruments designed in Ableton Live and Audiomulch by Korhan Erel. Korhan uses Omnibus to play ambient, electro-acoustic and free improvised music either as a solo artist or in collective performances, such as with Islak Köpek, Turkey’s pioneer free improvisation group he co-founded in 2005. He has been working on this instrument collection/performance system for more than a year. The instruments are played with various controllers including Nintendo Wii controllers, iPad, iPod, Novation Launchpad and Korg Nanokontrols. Omnibus uses Korhan’s field recordings, found sounds and sound designs as raw materials and manipulates them using granular, spectral and other means. It can also process external sound sources, such as acoustic instruments.

The recording of the concert is available here as a VBR MP3 file.

Korhan Erel is an electronic musician, improviser and sound designer based in Berlin. Their music covers free improvisation, conceptual sound performances as well as structured and composed pieces as well as music for dance, theater and video art. They perform solo, duo and group performances with improvisers, jazz musicians, dancers, and in orchestras. They have shown several sound installations in art spaces in Turkey, Germany and Hong Kong. They have ten CD and several digital releases. They play concerts across Europe, Middle- East, Southeast Asia and North America
View all posts by Korhan Erel →
This entry was posted in Uncategorized. Bookmark the permalink.
Loading Comments...
Comment
×
%d bloggers like this: