Islak Köpek at Gitar Cafe in May 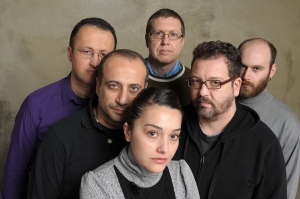 Turkey’s pioneering free improvisation ensemble Islak Köpek plays at Gitar Cafe in Istanbul after a brief hiatus. The concert is on May 5, Saturday and will start at 9 pm.

Korhan Erel is an electronic musician, improviser and sound designer based in Berlin. Their music covers free improvisation, conceptual sound performances as well as structured and composed pieces as well as music for dance, theater and video art. They perform solo, duo and group performances with improvisers, jazz musicians, dancers, and in orchestras. They have shown several sound installations in art spaces in Turkey, Germany and Hong Kong. They have ten CD and several digital releases. They play concerts across Europe, Middle- East, Southeast Asia and North America
View all posts by Korhan Erel →
This entry was posted in Performances. Bookmark the permalink.
Loading Comments...
Comment
×
%d bloggers like this: