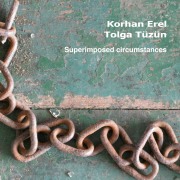 I will be playing a duo with Tolga Tüzün in the fourth leg of Tolga’s monthly concert series called “Encounters”. The encounter will take place at Dunia in Kadıköy, Istanbul and will start at 9pm.

Tolga Tüzün is a composer of new music, a pianist and a computer musician. An IRCAM fellow, he is currently the head of the music department at Bilgi University. See http://www.tolgatuzun.com for more info.

Tolga and I have recorded and released an album titled Superimposed Circumstances. This album is an electronic release on Tolga’s own label Another World. The album can be previewed and purchased on all digital distribution channels.

Korhan Erel is an electronic musician, improviser and sound designer based in Berlin. Their music covers free improvisation, conceptual sound performances as well as structured and composed pieces as well as music for dance, theater and video art. They perform solo, duo and group performances with improvisers, jazz musicians, dancers, and in orchestras. They have shown several sound installations in art spaces in Turkey, Germany and Hong Kong. They have ten CD and several digital releases. They play concerts across Europe, Middle- East, Southeast Asia and North America
View all posts by Korhan Erel →
This entry was posted in Performances. Bookmark the permalink.
%d bloggers like this: