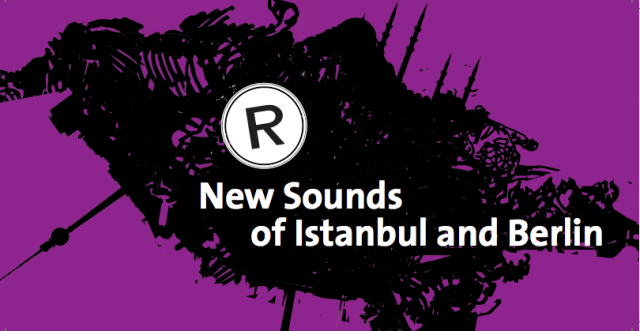 Korhan Erel will play two concerts with his two Istanbul-based projects on March 14 at Radialsystem in the New Sounds of Istanbul and Berlin event organized by Borusan Music House (Istanbul) and Radialsystem (Berlin), and curated by Ipek Ipekçioğlu.

The first concert will be with Islak Köpek at 19:00. Islak Köpek is a free improvisation ensemble founded by Korhan Erel and Şevket Akıncı in 2005. It has been at the forefront of experimental music in Turkey ever since and has pioneered the beginning of free improvisation as an established genre in Turkey with several festival, television appearances, sometimes going to the extent of having made fun of in Turkish TV shows, as well as two albums released in Turkey and the Netherlands. The ensemble will be celebrating its 10th anniversary with a first-ever international appearance. Berlin-based cellist Nora Krahl will join Islak Köpek for this concert. Nora is no stranger to new and experimental music scenes in Istanbul and has played several concerts with the members of the ensemble in and outside Turkey.

The second concert will be a collaboration with Istanbul-based percussion trio sa.ne.na at 23:00. This collaboration was initiated by Korhan Erel and Borusan Music House in 2012 and was performed at the venue in the beginning of 2013 to much acclaim. The group will perform own compositions that bring together new music elements with danceable music as well as a reworked version of Frederic Rzewski’s seminal piece “Coming Together”.

Korhan Erel is a computer musician, improviser, sound designer based in Berlin. He plays instruments he designs on a computer by employing various controllers. He also uses analog and digital electronics. He is a founding member of Islak Köpek, Turkey’s pioneer free improvisation group, which is regarded as the band that started the free improvisation scene in Turkey. He composes and designs sounds for dance, theater, installations and film. He collaborates with dancers, video artists and spoken word artists. Korhan’s collaboration with Sydney-based video artist Fabian Astore “The Threshold” has won the Blake Prize in Australia in 2012. Korhan’s computer performance system is called Omnibus. The instruments within Omnibus are a culmination of Korhan’s musical past and aesthetic choices. Omnibus instruments use concrete sounds (samples, field recordings), morphed and processed in realtime. They can be as simple as one single sample being played using a Nintendo Wii controller to a complex system that employs granular synthesis and spectral processing. The instruments are played interactively using Nintendo Wii controllers (Korhan’s choice of controller when he plays in ensembles with acoustic/electric instrument players), an iPad (used in solo/duo performances as well as ensemble concerts) and several midi controllers. No matter what technology he uses, Korhan always stays focused on the outcome and musicality rather than processes. Korhan is the co-curator (with Nicola Hein) of UnStumm, a project that brings video artists and musicians from Germany and one other country for audiovisual improvised collaboration. Korhan has had three residencies at STEIM (Center for research & development of instruments & tools for performers) in Amsterdam, where he studied use of sensors in music performance and instrument design. He was a guest composer at the Electronic Music Studios in Stockholm in January 2011. Korhan has seven CD releases on Gruenrekorder (Germany), Creative Sources Records (Portugal), Evil Rabbit Records (Netherlands/Germany), A.K. Müzik (Turkey) and Kukuruku Recordings (Greece) as well as several netlabel releases. He performs regularly in Europe and in the Middle East as a solo artist as well as with his projects in Germany and Holland.
View all posts by Korhan Erel →
This entry was posted in Performances and tagged Almanya, avantgarde, çağdaş müzik, özgür doğaçlama, Berlin, bilgisayar, Borusan, cello, computer, contemporary music, dance music, davul, deneysel müzik, der nasse hund, Deutschland, doğaçlama, doğaçlama müzik, drums, electric guitar, electro-acoustic, electronic, electronica, elektrik gitar, elektroakustik, experimental music, Free Improvisation, Germany, gitar, glockenspiel, guitar, IDM, Istanbul, kalimba, mallet kat, marimba, MIAM, nasser hund, new music, radialsystem, saksofon, saxophone, Turkey, vibraphone, vurmalı sazlar, vurmalılar, wet dog, yeni müzik. Bookmark the permalink.
%d bloggers like this: