The duo will play a series of concerts in 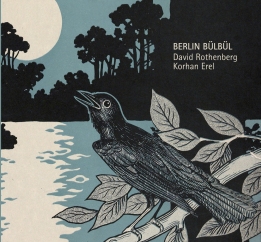 Istanbul and Berlin. The first album launch concert will take place at the Borusan Music House in Istanbul, one of the city’s most prestigious concert spaces, on April 3. In Berlin will be two open-air midnight concerts in parks live with nightingales on May 8 and 9, as well as an album launch concert at Sammlung Hoffmann on May 10. The duo will also play at a book launch event on May 22 in Berlin.

“Berlin is probably the best city in Europe to make music live with nightingales, because of its spacious parks and the large number of enthusiastically singing birds. Strangely enough, nighttime nightingale jamming doesn’t seem to be as popular an activity as one might expect, but we have shown that it does actually work. Almost everything one plays to a nightingale will encourage him to sing more. What is it like to play along with a nightingale? It becomes a direct window into the unknown, a touch of communication with a being with whom we cannot speak. The play of pure tones jarring against click and buzz, it all becomes not a code but a groove, an amphitheater of rhythms in which we strive to find a place. David Rothenberg and Korhan Erel went out at midnight to these urban woods last year to jam with these fabulous singing nightingales. David is a clarinetist and writer known for his work with creatures of all kinds. He records on the ECM label and travels the world looking for unusual animal musicians to engage with. Korhan is a Turkish electronic musician now living in Berlin, adept at sampling the birds live in their forest habitat. About half the tunes on the album are live human/nightingale encounters, and the rest are constructions mixing clarinets and electronic mysteries. Even when we are back in the studio the possibility of contacting the musical mind of the nightingale still influenced us. The resulting album, Berlin Bülbül, that’s nightingale in Turkish, is soon to come out.”